While there are many options available in post-mastectomy reconstruction, you and your surgeon should discuss the one that’s best for you.

Skin expansion: The most common technique combines skin expansion and the subsequent insertion of an implant.  Following mastectomy, your surgeon will insert a balloon expander beneath your skin and chest muscle. Through a tiny valve mechanism buried beneath the skin, he or she will periodically inject a salt-water solution to gradually fill the expander over several weeks or months. After the skin over the breast area has stretched enough, the expander may be removed in a second operation and a more permanent implant will be inserted. Some expanders are designed to be left in place as the final implant. The nipple and the dark skin surrounding it, called the areola, are reconstructed in a subsequent procedure.

Some patients do not require preliminary tissue expansion before receiving an implant. For these women, the surgeon will proceed with inserting an implant as the first step.

Flap reconstruction: An alternative approach to implant reconstruction involves creation of a skin flap using tissue taken from other parts of the body, such as the back, abdomen, or buttocks.

In one type of flap surgery, the tissue remains attached to its original site, retaining its blood supply. The flap, consisting of skin, fat and muscle with its blood supply, are tunneled beneath the skin to the chest, creating a pocket for an implant or , in some cases, creating the breast mound itself, without need for an implant.

Another flap technique uses tissue that is surgically removed from the abdomen, thighs, or buttocks and then transplanted to the chest by reconnecting the blood vessels to new ones in that region. This procedure requires the skills of a plastic surgeon who is experienced in microvascular surgery as well. 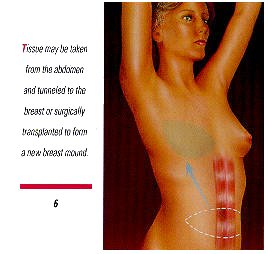 Regardless of whether the tissue is tunneled beneath the skin on a pedicle or transplanted to the chest as a microvascular flap, this type of surgery is more complex than skin expansion. Scars will be left at both the tissue donor sight and at the reconstructed breast, and recovery will take longer than with an implant.  On the other hand, when the breast is reconstructed entirely with your own tissue, the results are generally more natural and there are no concerns about a silicone implant. In some cases, you may have the added benefit of an improved abdominal contour. 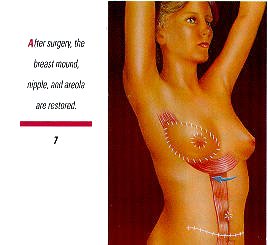 Follow-Up Procedures
Most breast reconstruction involves a series of procedures that occur over time. Usually, the initial reconstructive operation is the most complex. Follow-up surgery may be required to replace a tissue expander with an implant or to reconstruct the nipple and the areola. Many surgeons recommend an additional operation to enlarge, reduce, or lift the natural breast to match the reconstructed breast. But keep in mind, this procedure may leave scars on an otherwise normal breast and may not be covered by insurance.

You are likely to feel tired and sore for a week or two after reconstruction. Most of your discomfort can be controlled by medication prescribed by your doctor.

Depending on the extent of your surgery, you’ll probably be released from the hospital in two to five days. Many reconstruction options require a surgical drain to remove excess fluids from surgical sites immediately following the operation, but these are removed within the first week or two after surgery. Most stitches are removed in a week to 10 days. 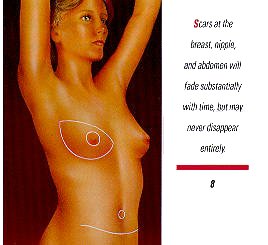 Reconstruction cannot restore normal sensation to your breast, but in time some feeling may return. Most scars will fade substantially over time, though it may take as long as one to two years, but they’ll never disappear entirely. The better the quality of your overall reconstruction, the less distracting you’ll find those scars.

Follow your surgeon’s advice on when to begin stretching exercises and normal activities. As a general rule, you’ll want to refrain from any overhead lifting, strenuous sports, and sexual activity for three to six weeks following reconstruction.

The Appearance Of Your Breast(s)
Chances are your reconstructed breast may feel firmer and look rounder or flatter than you natural breast. It may not have the same contour as your breast before mastectomy, nor will it exactly match your opposite breast. But these differences will be apparent only to you. For most mastectomy patients, breast reconstruction dramatically improves their appearance and quality of life following surgery.