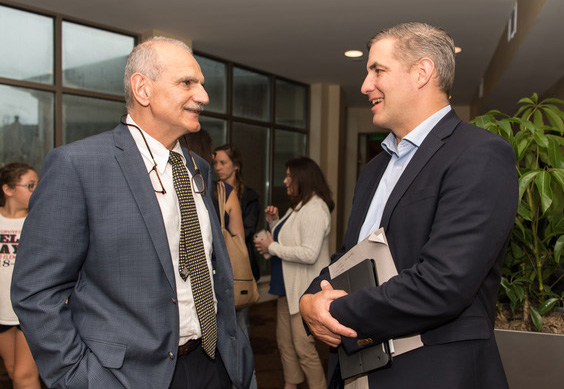 Recent state reports of elevated cancer levels in three central Long Island communities are very concerning and raise important questions about what these results mean, what can be the reasons and causes for these increases, and what can be done to mitigate them.

Yusuf A. Hannun, MD, Director, Stony Brook Cancer Center and Vice Dean for Cancer Medicine at Stony Brook Medicine, attended the public meeting. Afterward, Dr. Hannun said that although the data are preliminary, “These are important results and need to be investigated.”

In addition to the DOH data, it’s important to know whether mortality rates from these specific cancers are higher in Centereach, Farmingville and Selden than they are in the rest of the state, Dr. Hannun said. This is critical since sometimes increases in incidence are due to improved diagnosis and detection, but it is imperative to determine if they truly are the result of higher incidence levels and especially if this is associated with high mortality.

“We don’t have the mortality data yet. They should be available soon,” he said. “When they are, it’s very important to see if the incidence rates of these cancers translate into increased mortality. If so, this will need to be investigated thoroughly and determine what subtypes of these four cancers are the culprit and then identify possible causes.”As Suffolk County’s only cancer research facility, Stony Brook Cancer Center researchers will work with DOH scientists to interpret the data and look at possible causes of the high incidence rates.

Action Steps
The meeting at Stony Brook was one of four public meetings held by the DOH. Long Island is one of four regions in New York found to have higher-than-expected incidence rates of cancer. The other regions are Warren County in northeastern New York, Staten Island, and an area of East Buffalo and western Cheektowaga in western New York. The regional studies are part of the Governor's Cancer Research Initiative announced last year by New York State Governor Andrew M. Cuomo. As the next action steps:
• State health officials will try to find possible causes for the high rates of cancer.
• They will look at demographics and socioeconomic status of the people diagnosed with cancer, behavioral and lifestyle factors such as smoking, and the occupational and industrial background of the area.
• To identify environmental contaminants that may be affecting the cancer rates, the NYS Department of Environmental Conservation will contribute and analyze data for the study.• By the end of 2018, the DOH will share results of the study and also recommendations for cancer prevention and treatment.

NYS Cancer Facts
• Cancer is the second leading cause of death in New York State, with more than 110,000 New Yorkers diagnosed annually and 35,000 who die from the disease.
• The New York State Cancer Registry was established in 1940. The Registry collects reports on cancer diagnoses from healthcare providers, which include the anatomical sites of tumors, the stages at diagnosis, the cell types of the cancer, treatment information and demographic information. All individuals who are diagnosed with cancer in New York State are reported to the Registry.

On the Radio
Long Island News Radio Interview with Dr. Yusuf Hannun on 7/9/18