Many women fail to perform breast self-examination (BSE) because they don’t know how their breasts should feel and how to recognize changes. Normal breast tissue often feels nodular (lumpy) and varies in consistency from woman to woman. Even within each individual woman, the texture of breast tissue varies at different times in her menstrual cycle, and from time to time during her life. 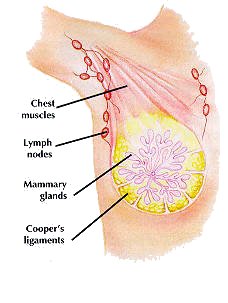 Understanding the normal anatomy of the breast will help you to become familiar with the normal feel of your own breast, and to gain confidence in your ability to do BSE correctly; you will be able to distinguish between suspicious new lumps and ordinary breast tissue that sometimes feels lumpy.

Interior Structure: Your breasts lie on top of, and are loosely attached to, the pectoral muscles on the front of your chest. The breasts move with these muscles which extend from the breastbone up to the collarbone and into the armpit, and do the major work of your upper arm and shoulder. Except for tiny ones in the nipples, there are no muscles within your breast; their form and structure are supported by a framework of fibrous, semi-elastic bands of tissue called Cooper's ligaments (after the physician who first identified them). These ligaments partition the breasts into a honeycomb of interconnecting pockets, each containing mammary glands surrounded by lobules of fatty tissue. During breast feeding the mammary glands ("milk lobes") produce milk, which is collected by a system of ducts which empty into the nipple. Your breasts are surrounded by two chains of lymph nodes – small, kidney-shaped glands that defend your body against disease and infection by filtering out invading organisms from surrounding tissues. A large chain of lymph nodes extends from the lower rim of the breast up into the armpit, with a smaller chain reaching deeper in, toward the breastbone.

External Contours: You may notice that there is a slight difference in the size of your breasts or even in the size or shape of the nipples – this is normal. The shape and size of your breasts depend on your heredity, your weight, and the supporting ligaments. If the proportion of fibrous tissue is high, ligaments will be strong and not excessively stretched and the breasts will feel firm and retain their shape. If the proportion of fatty tissue is higher, breasts are heavy or pendulous and feel softer. Though the nipples may vary in size or shape, they are usually roughly symmetrical (unless one breast is markedly larger than the other). The areolae, or pigmented area around the nipple, may be any color from light pink to black, and may vary in size from a very narrow ring to one which covers as much as half of a small breast. Areolae, too are generally symmetrical.

Puberty: Normal changes in the breasts, including enlargement of the areolae, begin when the breast begin to grow, before the onset of menstruation. Growth is controlled by the female hormones, estrogen and progesterone, which continue to produce normal changes in breast tissue throughout a women’s lifetime. Such regular variations including swelling, tenderness and increased nodularity (lumpiness) just before the menstrual period, when hormone levels are highest; breast feel least nodular after menstruation. (The breast of young girls who have not yet begun to menstruate are seldom nodular at all.)

Pregnancy: Brings changes similar to those occurring before the menstrual period:

At any age: Breasts will increase or decrease in size with changes in your weight; because they are largely composed of fatty tissue, their shape and texture may alter as well if your weight loss or gain is dramatic.

General: Most normal changes take place in both breasts, simultaneously and roughly symmetrically (that is, in the same relative position or are in each breast.) Such changes are less likely to indicate a problem than those occurring in one breast only.

The National Cancer Institute, the American Cancer Society and the American Academy of Sciences have all issued guidelines recommending a reduction in fat consumption from 40 percent to 30 percent in the average woman’s diet, as well as decreasing the total caloric intake. International differences in the incidence of breast cancer correlates with variations in diet, especially fat intake. Those countries where the diet is high in fat have a higher incidence of breast cancer.

However, a newly released Harvard study, that included over 335,000 women from four different countries all of whom followed a very low fat (less than 20 percentof their calories came from fat) diet, did not bear this out. The study found that test women on extremely low fat diets, had no more protection from breast cancer than women who ate the typical American diet, which contains more than 30 percent fat calories. Additional studies are being conducted. In the meantime, there is no question that a lower fat diet reduces the risk of cardiovascular disease and possible colon cancer.

The American Journal of Public Health, (November 1, 1988) reported that getting a "lot" of fiber in your diet lowers your risk of breast cancer (as well as other types of cancer).

These findings were the result of a survey of 7,700 women where it was found that women who frequently were constipated, (often the result of low fiber diets), were more apt to get breast cancer as well as colon cancer. The rational behind this is that when you are constipated, the toxins found in food have more time to be absorbed into your body, and the effects of these toxins are not limited to just the colon.

Studies conducted at Harvard Medical School and the National Cancer Institute have linked the consumption of alcoholic beverages with an increased risk of breast cancer. However, two studies, one conducted in 1988 by Dr. Susan Chu of the Centers for Disease Control in Atlanta, Georgia, and another study reported in the Journal of the National Cancer Institute (1989), could not confirm this link.

More recent studies however, have again linked alcoholic drinks with an increased risk of breast cancer. A study published in the Journal of the National Cancer Institute (1993), showed that women who consumed an average of two drinks per day had higher levels of estrogen in their blood and urine than they did when they did not drink at all. (Their diet remained the same). Estrogen is known to be a potent hormone that promotes the growth of cells in the breast and the reproductive organs and many experts think the continual exposure of breast tissue to estrogen is probably at the root of breast cancer. Since all women do not get breast cancer, obviously other factors also play a role. Therefore, women who are already at increased risk for breast cancer would be advised to eliminate alcoholic beverages entirely.

At a recent symposium on breast cancer sponsored by the University of California, San Francisco, one of the speakers reported there are clear indications that the way to prevent breast cancer is to reduce the levels of the female hormones estrogen and progesterone.

Regular exercise dramatically reduces the risk of breast cancer in young women according to an article published in an issue of OB-GYN News (November 1, 1994).

Why exercise provides this protective effect is not fully known but any factor that reduces the frequency of ovulation would decrease the risk of breast cancer since investigators believe it is the cumulative exposure to ovarian hormones that appears to increase the risk of breast cancer. Exercise has been shown to shorten the luteal phase of the menstrual cycle. It is during this phase that ovulation and the production of progesterone are stimulated.

Other investigators confirm the apparent link between diet, exercise, and breast cancer. Additional studies are needed to verify this common link.

Several studies have indicated smokers are at increased risk of breast cancer, with the risk increasing as the number of cigarettes smoked a day increases. These studies suggest smokers may have impaired immune systems.

Environmental tobacco smoke (ETS) is the smoke breathed out by a smoker and includes smoke from the tip of a burning cigarette, also increases the risk for serious health problems including impairing the immune system.

Though the authors of the three aforementioned studies emphasize their findings are not conclusive, they do indicate there may be some subgroups of women at greater risk – for example, women who have never borne children, women with a strong family history of breast cancer, and women who were taking oral contraceptives for over seven years. However, the evidence is still inconclusive and conflicting.

Therefore, the Food and Drug Administration advisory panel, the Centers for Disease Control, The World Health Organization and advisory committees from other health agencies have recommended no change in prescribing practices.

A large, long-term study of women taking estrogen plus progestin from 2 to 10 years or longer, showed no statistically significant increase in the risk of breast cancer. This study was reported in a February 1996 OB-GYN abstract.