The usual treatment for breast cancer is surgery - some form of mastectomy, or removal of all or part of the affected breast - either alone or in combination with radiation and/or chemo (drug) therapy. Although you will make the final decision about the extent of any breast surgery you consent to undergo, your decision should be based on your doctor's and surgeon's judgement, and on complete information about the likely benefits and possible consequences of each alternative.

Many surgeons have reassessed the standard operative approach to breast cancer after observing no significant decline in the per capita mortality from breast cancer over the past fifty years. According to an article appearing in Clinical Update, Autumn, 1987, published by the Mayo Clinic in Rochester, Minnesota, two different approaches to the surgical treatment of breast cancer arose as a result of this reassessment. One approach, excision of the tumor itself with the dissection of axillary nodes and external radiation, and secondly, the modified radical mastectomy. The question being asked is, "Is the minimum possible operation always most desirable?" 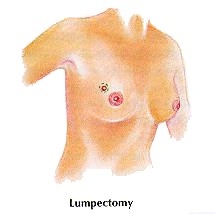 The surgical procedure increasingly being performed in a situation where the tissue surrounding the tumor is not involved, is called a lumpectomy. In this procedure, the tumor including 1-2 cm of surrounding (an uninvolved) tissue is removed. This is sometimes referred to as a tylectomy. The lymph nodes under the arm are almost always removed. Lumpectomy followed by radiation therapy is the treatment of choice now in those women with early-stage breast cancer. Radiation therapy usually begins about two weeks after lymph node surgery and continues for 5 to 6 weeks. When the treatments are completed, an extra "boost" of radiation is usually given to the area where the tumor was located. Two long-term studies published and reported in the OB-GYN News (June 1, 1995) issue, reinforced earlier studies that indicated a lumpectomy, followed by radiation, in patients with state I or II breast cancer, had similar survival rates at 10 years, as women who underwent mastectomy for their stage I or II disease.

Most mastectomies are generally one of four types. The surgical treatment of choice must be individualized to each patient. Though you have the final decision as to the extent of breast surgery you consent to, it should be based on your doctor's and surgeon's judgement, and on complete information about the likely benefits and possible consequences of each alternative. 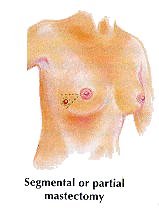 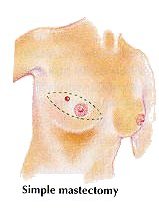