More patients with complex tumors of the gastrointestinal (GI) tract are benefiting from the use of recent advances in minimally invasive surgery, including robotic-assisted surgery.

This September, Stony Brook’s Surgical Oncology team became the first on Long Island to perform a fully robotic Whipple surgery. The procedure was performed by two surgical oncologists, Joseph Kim, MD, and Georgios V. Georgakis, MD, PhD, who used the da Vinci® S HD™ Surgical System to operate on a patient with stage II pancreatic cancer. The Whipple procedure, named after surgeon Allen O. Whipple, MD, and also known as pancreatico-duodenectomy, is used to remove tumors located in the head of the pancreas, where the majority of pancreatic cancers occur.

Because of where the pancreas is located in the body, the Whipple surgery is one of the most difficult gastrointestinal operations to perform. The three organs involved in the digestive process — the liver, the pancreas, and the intestines — are interconnected by a complex system, through which the pancreas and liver supply the digestive enzymes into the stomach. The Whipple procedure involves the removal of the head of the pancreas, the duodenum, and the gallbladder as well as portions of the stomach and the bile duct.

It also requires careful and complete removal of all of the surrounding lymph nodes. To accomplish this, the surgeons must remove other organs around it. The procedure can take five to six hours, with associated complications, but it is the only treatment option that has any chance to offer a cure for patients with pancreatic cancer. In some cases, when the cancer has spread locally to major blood vessels, it may also require a procedure to remove or reconstruct these arteries or veins.

“Traditionally, this procedure is performed by conventional open surgery and more recently, by the laparoscopic approach,” said Aaron R. Sasson, MD, Chief, Surgical Oncology, at Stony Brook University Cancer Center, who has performed more than 500 Whipple resections throughout his career. “We had the ideal set of circumstances to be able to perform the first fully robotic Whipple at Stony Brook. First, we had the surgeons. Dr. Kim has extensive experience in both open surgery and in overall GI robotic-assisted surgeries and Dr. Georgakis recently joined the team with extensive robotic oncology training. Second, we had a patient who fit the medical criteria perfectly.”

While some aspects of this surgery have been done robotically, the fully robotic Whipple has been accomplished in only a few cases in the U.S., due to its complexity. “It requires the surgeon to know how to do the standard open operation in addition to having the robotic skills needed to carry out the surgery,” Dr. Kim said. “That’s why this operation has been successfully completed from beginning to end in less than five hospitals across the country.”

The Advantages of Robotic-Assisted Surgery
Using the da Vinci system, surgeons have improved visualization during the procedure and are able to make more precise manipulations. The insertion of a video camera, which can be moved throughout the abdominal cavity, gives the surgeons a variety of perspectives and close-up details. “There are angles to the operation that we can now see clearly,” Dr. Kim said.

Dr. Georgakis likened the robotic component to the ability to see illustrations in a hand-held book versus looking at it from far away. “Imagine that you hold a book close to your face so you can see every detail of the picture, versus having it three or four feet away from your face,” he said. “That is one of the main benefits of using the robot.”

It is important to note that while the surgery is delivered via the robotic equipment, the surgeons at the robotic console remain in control at all times. While the robot allows for better precision and visibility, it acts as an extension of the surgeons’ hands, and they stay completely in charge of the critical decision-making and intricate movements throughout the process.

“Instead of using my hands and fingers to maneuver surgical instruments, I'm using the robot's small instruments,” Dr. Georgakis said. “I’m guiding the robot and I’m in total control the whole time.”

Benefits to the Patient
Patients stand to gain significant benefits from the minimally invasive surgery of the robotic Whipple. By using the robot, the surgeons are able to make significantly smaller incisions. The traditional open Whipple typically requires a larger incision to remove the tissues from the abdominal cavity and is approximately 15 cm. On comparison, the robotic incisions range from 8 to 10 mm, which helps to reduce pain, shorten recovery time and achieve a better cosmetic result.

Our Patient’s Story
The patient, a 68-year-old woman, who complained about abdominal pain, was referred to Dr. Kim by a physician in the community after a CT scan revealed a growth in her pancreas. A Stony Brook gastroenterologist performed a biopsy, which confirmed that the patient had stage II pancreatic cancer and needed immediate surgery.

The patient’s son was to be married within a few days of her diagnosis. She wanted to be able to attend his wedding and was highly motivated to have the fastest recovery possible. The robotic-assisted surgery could offer that opportunity.

“We had a discussion about doing this procedure robotically, and we offered it to her,” said Dr. Kim. The approach proved a success and the operation and hospital stay went without complication. The patient’s gastrointestinal tract returned to its normal function, and she was able to eat within the first couple of days, the surgeons said. At her discharge, six days after surgery, she was only taking Tylenol for pain. She was able to attend her son’s wedding and is set to return to the Cancer Center for her post-surgical chemotherapy treatment.

Specific Criteria Determines Optimal Approach
While the robotic Whipple offers considerable benefits to some patients, it has certain limitations and may not be advisable for everyone, the surgeons said. In case of advanced pancreatic cancer, when major blood vessels must be removed or reconstructed, the robotic platform may not be feasible. That requires the involvement of a vascular surgeon, and vascular surgical procedures cannot be performed robotically at this time.

Additionally, the robotic procedure may not be advisable for some of the patients with serious medical conditions, who may develop various age- or disease-related complications. In these conditions, the open surgical method would be more ideal for the patient.

A Team Effort
Diagnosing and treating patients with pancreatic cancer is a multidisciplinary effort that involves medical professionals with several areas of expertise. At the diagnostic stage, it includes gastroenterologists, pathologists and radiologists, who play a vital role in evaluating the tumor and determining whether it has spread to other organs or the surrounding blood vessels. At the treatment stage, it involves medical oncologists and radiation oncologists who determine the treatment options for the best outcome.

“Patients with pancreatic cancer go through a whole host of issues that are of great concern,” said Dr. Sasson. “We all work together to provide optimal medical care based on each individual case. We look forward to expanding the use of robotic-assisted surgery for complex GI tumors and other diseases.” 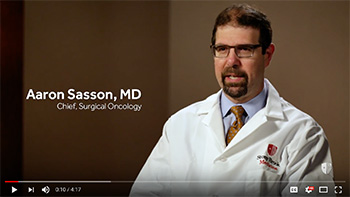 For more information about the Department of Surgery, click here.