Back to Main Breast Cancer Page

There are different types of breast lumps. The following descriptions and illustraitons provides some details. If you have any questions, follow-up with your doctor.

Although any lump formed by body cells may be referred to technically as a tumor. Not all tumors are malignant (cancerous). Most breast lumps – 80% of those biopsied – are benign (non-cancerous). Following are examples of the most common benign breast conditions which produce lumps.

Fibrocystic changes: This is not a disease, but rather a benign (not cancer) condition affecting 50 to 60 percent of all women. Fibrous breast tissue, mammary glands, and ducts overreact to the normal hormones produced during ovulation, resulting in the development of fibrous lumps and/or 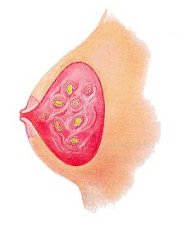 Fibrocystic changes are the most common non-cancerous breast condition. They are most common in women between the ages of 20 and 50. They are unusual after menopause unless a woman is taking hormones. 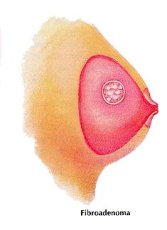 The size and tenderness of Fibrocystic lumps usually increase before menstruation, decreasing after the period ends. This condition, also known as cystic mastitis, generally disappears after menopause. Medical opinion is still divided over whether Fibrocystic disease increases the risk of breast cancer.

Recent research has reported that the chemical called methylxanthines, found in coffee, tea, cola, chocolate and some diet and cold medication, seems to promote the growth of Fibrocystic lumps. In one study, more than half the women who gave up the above items from their diets found that their cysts gradually disappeared. 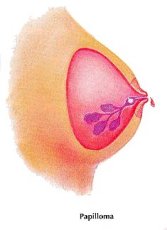 Fibroadenomas: These benign tumors are solid lumps of fibrous and glandular tissue. They occur most frequently in women between 18 and 35 and account for nearly all breast tumors in women under 25. Fibroadenomas are not usually tender (although tenderness may be felt just before menstruation), and are generally movable when palpated (rolled with pads of the fingers).

Papillomas: These small wart like lumps grow in the lining of the mammary ducts, near the nipple. The often result in a discharge, either clear or bloody, from the nipple. 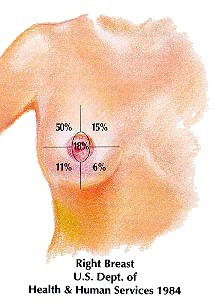 we have seen, most breast lumps are benign, non-cancerous cysts or tumors. Although they may require surgical removal to prevent their interfering with normal breast function, they will not invade surrounding tissue; they are not life threatening. Malignant breast tumors, however, if not detected and treated early, will continue to grow, invading and destroying adjacent normal tissue. If unchecked, they will spread to surrounding lymph nodes; then, by a process called metastasis, cancer cells will break away from the tumor and spread, through the lymph system and bloodstream, to other areas of the body. At this stage, breast cancer is deadly, and chances of cure are far lower (one-half or less) than in the early, localized stage.

Although some breast cancers may first announce their presence by nipple secretions, changes in the nipple's appearance, nipple tenderness or dimpling or puckering of the skin, most malignant tumors appear first as SINGLE, HARD LUMPS OR THICKENINGS that are frequently, but not always, painless. Commonly developing from the mammary glands or ducts, such malignant lumps generally (about 50 percent) appear in the upper, outer quadrant of the breast, extending into the armpit, where tissue is thicker than elsewhere. (Eighteen percent of breast cancers occur in the nipple area, 11 percent in the lower out quadrant, and 6 percent in the lower inner quadrant.) ANY change in size, shape, texture or nipple that occurs in one breast only is more dangerous than if such changes happen simultaneously in both breasts in the same position. Report such a change at once. 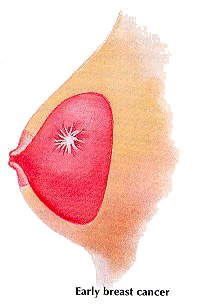 Early breast cancer is confined to the breast only. Even an "early" tumor (defined as an inch or less in size) may have been growing for as long as eight years before it is large enough to be detected; regular BSE combined with your doctor’s or other healthcare professional’s periodic breast examinations and mammograms will greatly increase your chances of recognizing an early breast cancers. The five-year survival rate for woman whose breast cancers are treated in the early, localized stage is 96%.

Advanced breast cancer is a tumor that has spread from the breast to involve lymph nodes in the armpit, neck or chest; once these are affected, the five year survival rate drops to 73 percent or less.  An estimated 46,000 women and 300 men died of breast cancer in 1994, in spite of treatment including surgical removal of the cancerous breast, lymph nodes, and (in extreme cases) ovaries. Many of these deaths could be averted if more women would examine their own breasts and consult their doctors promptly in case of suspicious findings. 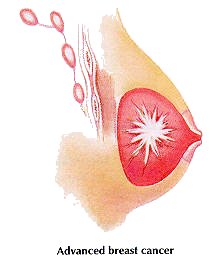 In disseminated breast cancer, the advanced tumor has grown to affect not only the adjacent lymph nodes but also, through metastasis, such other parts of the body as the bones, liver, lungs, and even the brain. When treatment does not begin until cancer has disseminated, the five-year survival rate is exceedingly low.

Remember that, although you can discover your own breast lumps, only your doctor can determine accurately whether a lump is benign or malignant. The important thing is to be diligent and thorough in your monthly BSE – and to report any abnormality.