If your doctor believes you may have prostate cancer, based on the results of screening tests, you may be referred for a biopsy.

A biopsy is an outpatient procedure that takes tissue samples from the prostate. The samples are sent to a pathology lab, to determine if there is cancer in the prostate.

As with other cancers, early detection and treatment of prostate cancer can save lives. But traditional biopsies can sometimes give inconclusive or inaccurate results, which could lead to under- or over-treatment for some men.

Using a special device that “fuses” a recent MRI of the patient’s prostate with a real-time ultrasound image, the urologist performing the biopsy can see the prostate in 3D. This allows greater clarity and more precise targeting of specific suspicious tumors. This biopsy method benefits patients whose previous testing has indicated a strong possibility for prostate cancer.

How Fusion-Guided Biopsy Works
With the traditional biopsy method, doctors take ultrasound-guided tissue samples. But because the ultrasound image doesn’t differentiate between cancerous and normal tissue, it’s possible that some cancers will be missed, or that samples will be taken from insignificant cancers that are unlikely to need treatment.

In contrast, with the MRI/ultrasound fusion method, the urologist doing the biopsy can target specific lesions that have previously been identified as potentially significant cancers on an MRI scan.

• The patient first gets an MRI. A specially-trained radiologist analyses the MRI, marks specific lesions, and grades them with a score from one to five, with five being most suspicious for prostate cancer.

• The fusion of the two images lets the urologist more clearly visualize suspicious areas in the prostate and, with ultrasound guidance, target those specific areas for biopsy.

Research has shown that these targeted biopsies are better at detecting more clinically significant cancers that need to be treated, as opposed to low-risk tumors that often don’t need treatment at present.

While an MRI/ultrasound fusion-guided biopsy doesn’t guarantee to find all lesions, it can help reduce the need for repeat biopsies by finding tumors that are high risk. And just as important, it may help reduce further procedures for tumors that don’t need immediate treatment. 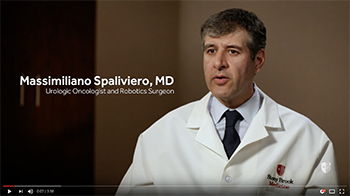