Stereotactic Body Radiation Therapy (SBRT) is a technique that delivers high radiation doses to a tumor target in a hypo-fractionated schedule. This means it is delivered in a few treatments but using a high dose per treatment. The schedule is usually two to five fractions over a one- to two-week period without increased complications when compared to conventional radiotherapy.

There is a large volume of published data demonstrating dramatically higher rates of local control with SBRT when compared to conventional radiotherapy. SBRT can deliver an optimal radiation dose to both new primary and metastatic cancer sites. It can also be used on previously irradiated sites safely to avoid damage to the critical structure, such as the spinal cord. SBRT is used in the treatment of spinal tumors, liver tumors, and other sites as well. Treating lung cancer with SBRT is an excellent alternative choice for patients with medically inoperable tumors, elderly patients who are considered high risk for surgery, or patients who refuse surgical treatment.

The BodyFIX® System is utilized for patient positioning and immobilization. The device is a non-invasive immobilization and fixation system, which limits breathing and tumor motion during simulation and treatment.

SpaceOAR for SBRT Prostate Treatment
SpaceOAR hydrogel is an option for men who undergo radiation treatment for prostate cancer. It acts as a spacer providing space between the rectum and the prostate, making it much less likely that the rectum is exposed to radiation. It is injected into place prior to the start of radiation treatment. Patients may be awake or asleep under general anesthesia for the procedure. SpaceOAR hydrogel is minimally invasive, remains stable during radiation therapy and then is gradually absorbed by the body after radiation therapy has been completed. 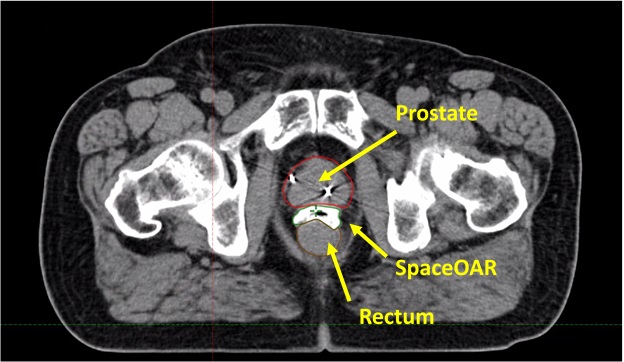